I've touched on this subject in the past but I didn't realise as to the extent it went. It's certainly possible Twitter has always been troublesome in that respect but I've only just come across it.

I've had Twitter for about six years or so. At first I didn't know what to make of it, not really seeing the point, but as I've followed more and more people it's become a useful tool and in many ways far more useful than Facebook. I think it's fair to say Facebook is to keep in touch with friends and family while Twitter is for people with shared interests.

Celebrities and people in the entertainment industries also use Twitter. I imagine some celebrity accounts are managed by someone on their behalf but it's also clear that many celebrities post directly themselves. Twitter has a verification for celebrity accounts as to confirm that they are who they claim to be and not a spoof parody account, this is known as the blue check mark. People with the mark always have their profiles and posts at the top of the list when searching. I've also noticed a lot of minor celebrities don't have the check mark while some people who are relatively unknown do, which is slightly odd.

Anyway back to the point I'm making. There is something strange happening with Twitter and I think they really need to clean up their act, and monitor what's being said, even to the extent of banning people and removing their blue check mark.

It's reached the stage now where I won't follow someone if they have a blue check mark next to their name for it no longer stands for celebrity, it stands for internet troll. They can say what they like and insult who they like with no consequence. It's disgusting that A-list celebrities, professional writers and others with a blue check mark can say outrageous things and get away with it, while others can get a temporary ban for the simplest of comments that may be deemed offensive. 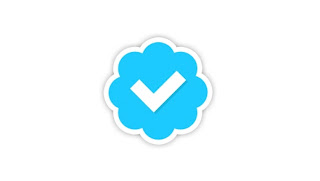