The reason for this blog entry is I've noticed a very odd trend recently. I've been following a lot of famous authors on Twitter and at first it felt amazing to be able to make contact with such people, but I've noticed they won't post a single entry talking about the subject of books. I won't mention their names but a lot of famous authors will rant about politics even to the extent of lecturing their followers as though they are somehow morally better people than their fans. One writer in particular only talks about Donald Trump comparing him to Hitler in a lot of cases.

I'm all for political discussions by the way so if that's what someone wishes to use their Twitter page for then I'm all for that. What I'm referring to is when someone has a page to promote themselves or their work and only rants about politics.

I met an artist who drew beautiful illustrations, mainly of cats, and was giving out her contact cards at a convention. When I saw her Twitter page rather than talk about her art it was just page after page of Donald Trump and Brexit posts.

Personally I think it best to stick to subject.

Last week on Saturday I attended London Comic Con Spring. It was very similar to The London Film & Comic Con being it was organised by the same company Showmasters and was the same venue at Olympia but did differ in some ways. It was far smaller for instance and didn't make use of the full hall.

I cosplayed as Tom Baker's Dr Who and met a lot of other Dr Who cosplayers. I already suspected there'd be a lot of Dr Who cosplayers on account of the Dr Who actors that were attending, albeit with some of them cancelling before the event. In fact there were a lot of cancellations.

I met Colin Baker and Sylvester McCoy and got their autographs. I also met some professional cosplayers getting their autographs as well as photos. Ironically even though I had people taking photos of me in my cosplay I had neglected to take any of myself.

The James Bond Aston Martin was on display. Whether it was the original car or just for display I wasn't sure. It was covered with scratches along its sides but I suspected they were painted on.

I was a little miffed that there was no DVD stall or anime comic stand which was often the case at other conventions. I did purchase Japanese sweets as well as a comic called The Rabbit along with other bits and bobs of memorabilia. I particularly liked the framed art of Lara Croft. 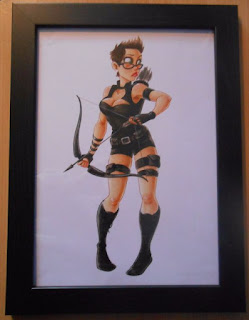 While sorting through my bookshelf I noticed a book that I had yet to get around to reading. I remembered purchasing it not long ago but with so many other books to get through I hadn't started it.

As I leafed through the pages I noticed it was full of brown stains particularly around the edges of each page with various degrees of foxing. I've read books from the 1800s before so it's not something that I've any particular issue with. In fact brown stains, along with the smell of ink, can add a certain charm to a book.

The thing is though this isn't a book from the 1800s. It's The Veiled One by Ruth Rendell. This particular edition from 1989. I've got other books from the same period, kept on the same shelf, in near perfect condition.

I'll still read it, it's not something that puts me off, but I do find it odd how some books age faster than others. I'm guessing it's down to the paper and the process of printing more so than how the book was kept. 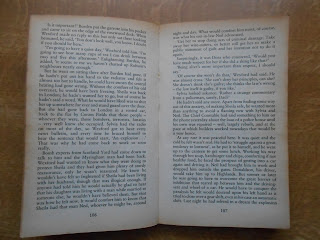 I was thinking about this recently about books that have influenced me over the years and while I can list many I realise there's one book in particular that I've totally forgotten the name of. While some well written books have really got me into writing, others have had the opposite effect, but there was one book in particular that taught me how to write in a particular style whilst avoiding cliches. To sum it up the story was terrible, a layer of cliches upon cliches, with a completely predicable ending, yet at the same time it was a real page turner, a very easy read.

The story is about a man who has an apartment in South America. It is soon to be Mardi Gras and the president is going to attend a parade so a group of terrorists decide it's the best time to assassinate him. The best location to shoot him from is within the man's apartment so a female terrorist befriends the man and tricks him into falling in love with her. If I remember rightly her name was Maria. She then reveals her plans to him but he is smitten with her so goes along with the plan and allows the terrorists to use his apartment. The assassination goes wrong and they are all on the run and hide within a cave. One by one each terrorist is caught and gets shot by the police apart from the main character and Maria who catch a plane to North America.

Every inch of Maria is detailed, her wide gummy smile, her wavy raven hair, her button nose, her hourglass figure, the shape of her swollen nipples, the shape of her breasts and the wiggle of her walk. Bare in mind this isn't an erotica, she was never naked in a single scene. The men are described as a bearded man, a moustached man, a smooth shaven man, etc. The one thing that stands out the most of me is the scene where they hide within a cave. It's pouring with rain at the time and while essentially nothing happens, other than exploring the cave and getting muddy, it's an entire chapter and was far more detailed than the events leading up to it.

While the plot was completely far fetched and the ending predictable it was still such an enjoyable read. It's both a lesson on how not to write a book and how to not write one at the same time. It may have been a cliche but if that was what the author intended then it was a masterpiece.