I was thinking about this recently as I'm the kind of person who gets a little stressed out now and again and feel the need to relax whenever I can. I often feel things getting on top of me have have the urge to hide away somewhere so it's good to have some me-time where I simply relax for the sake of relaxation.

There are ASMR videos on YouTube where someone, usually female but not always, will talk or do a mundane task making certain noises that can kind of put people into a hypnotic state. It's not true hypnosis for they are not adding any kind of suggestions but it can be very calming. Some of these vids can be very powerful while others don't have any desired effect, but I think it's more down the listener and their mood.

I remember as a kid at school doing mathematics and I'd have a box containing various kinds of rulers and protractors. I used to get tingly feelings in my forehead looking at the fine lines on the protractor, even now certain clock faces give me the same feeling when looking at the lines representing the seconds.

I recently bought a magazine that contained a Panini sticker album of Frozen 2. It came with some stickers within the album itself along with some separate packs of stickers. While sitting on my bed sticking the stickers into the album I began to realise I had the same forehead tingles as I had while watching the YouTube vids. There's something about looking at artwork on such a small sticker that makes my head feel funny. I certainly would not feel the same way about looking at a poster for instance. It could be a deep inner process of my brain going into a state of trance or the fine line of the art messing with my vision causing eye strain, either way it feels relaxing. The sticker packs are quite expensive however so it's not something I can do on a regular basis. 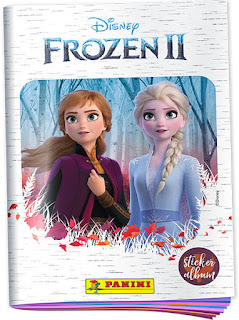